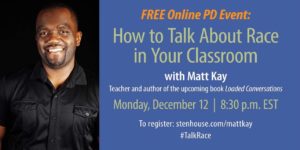 English Teacher Matthew Kay does his best writing from the classroom to his house.

He gets distracted by his classroom and his home office, but zones out to his Beats headphones and go in while writing.

This writing routine is going to have a big payoff for Mr. Kay in 2017. Last fall, he announced that he will be publishing a book around race in the classroom. The working title is “Loaded Conversations.:

Before releasing the book, Mr. Kay held a well-attended online professional development on December 12th for whomever was interested in watching and participating. The conversation lasted an hour with people from all across the United States that is genuinely interested in improving race relations in their classroom.

Kay is not new to helping teachers improve race conversations in their classrooms. Kay started this specific line of work three years ago at EduCon with History Teacher Pearl Jonas. After seeing such success, he continued to hold sessions around race in the classroom both at SLA and in other venues.

When teachers at SLA were asked about his work, they all appreciated having Kay here at SLA.

Jonas stated that “his discussion rules, listen actively, police your voice and be patience.” Jonas also shared that Kay has been leading more professional development around the class.

Math Teacher Brad Latimer, who has been teaching for nine years at SLA but also is a Adjunct Professor at the University of Pennsylvania, shared that “Kay is probably the most talented the educator that I have ever in terms of setting classroom expectations and being consistent in terms of creating a learning space that is safe, comfortable for everyone in the room and consistently reinforcing that it is a learning process.”

Mr. Kay received news that he may be writing a book from SLA Founding Principal Chris Lehmann. Mr. Lehmann received a call from now Kay’s publisher searching for a teacher to write a book about race.

As Kay says, “I luckily happened to be in the office at that point just hanging around.”

Kay has provided SLA Media with an exclusive part from his book. “…that if we are training the next generation of teachers, entertainers, lawyers and politicians; if we are molding thoughtful citizens, wise counselors, and people of righteous passion; then our classrooms must be deliberate in their approach to conversations about race.”

What motivated Kay to write on this topic? After completing a PD with Ms. Jonas he saw how engaged people are really pushed him to write the book when the opportunity arose.

According to the Science Leadership Academy website, Kay is an alumni of the Philadelphia Public Schools and West Chester University. He is one of 5 founding teachers left at Science Leadership Academy and also serves as an Athletic Director and Varsity Boys Basketball Coach. Kay is not only a teacher at SLA, but is also the founder and coordinator of the PYPM Slam League.

The book is not the only arrival coming for Mr. Kay this year. As many students know at SLA, he and his wife, who is also an English teacher, are expecting a baby girl soon.