Though History Teacher Dan Symonds might be new to SLA, the core values of the school are not new to him. An activist since his high school years, Mr. Symonds strives to defend public education in the time of budget cuts and political control.Having worked in some of Philadelphia’s more underfunded schools, he’s seen firsthand the things that make the School District of Philadelphia the neglected place that it is. 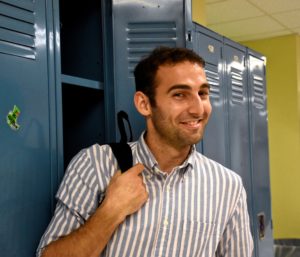 Mr. Symonds’ interest in political movements is not limited to Philadelphia.

“Lately, I have been inspired by the actions of water protectors at Standing Rock, of high school athletes raising consciousness through national anthem actions, and of workers in India staging the largest strike in human history,” he said.

Mr. Symonds grew up in the era of George Bush Sr. and remembers reading about the war on terror in the newspaper. As a result, at a young age, he came to the realization that as a privileged individual, he could not simply watch these things go on in the world. He wanted to do something about it.

“If you don’t have official influence through corporate or state entities, dissent, protest, organizing and direct action are natural channels for building strength,” he remarked.

His passion for education is even apparent in the classroom. A freshman in his African-American history class, Orlando Aguayo, said, “He is open to our ideas and opinions and I can tell he cares about my education.”

Outside of the Classroom

Though Mr. Symonds spends a great deal of his free time involved in political activism, that’s not the only thing he does. “I like to dance. I think dancing is an important thing to do in life. I’m a terrible dancer, but if you don’t like dancing, you’re not that fun and I think as a bad dancer, it is so important to dance,” he said, laughing.

Mr. Symonds is always looking for an opportunity to travel. He tends to do most of his international travel over summer break. This past summer he went to Hungary, Denmark, Poland, Serbia, and Germany with some friends.

He can also be a handy-man when he wants. He explained, “I take a good deal of pride in knowing how to fix stuff, so right now, I moved into a house with friends and tiled some of the bathroom, put my own doorknob in, put in shelves.”

When it comes to music, he is not picky about genres. In college at Swarthmore, he used to have a radio show. “I like hip-hop, electronic music, especially disco, I think disco matters, and a lot of weird old country folk,” he noted.

Hiring Mr. Symonds was not a difficult choice, because he already thought like the SLA teacher. History Teacher Pearl Jonas, was a part of the team that interviewed Mr. Symonds, and she only had good things to say about him.

“We are always looking for someone who is going to do well here in a project based learning environment, who’s interested in collaborating with other teachers, who seems to just get SLA coming in,” she explained. “He was very genuine and you can tell that’s how he thinks about education and about learning, about kids, so that really made him stand out.”

Mr. Symonds is not used to being in a district school with resources. He is still trying to adjust to an environment where teachers and students are prepared for class.

“This school year feels like my first year teaching again, because this is the first year I get to actually teach stuff as opposed to putting out fires, both literally and figuratively,” he said. Working in other district schools, he recalled that he has “seen more nonsense, oppression, and anti-student happenings than [he] cares to remember.”

Despite this, he seems to be adjusting well, as he raved about SLA’s environment: “SLA is a happy place, and many schools aren’t. I’d like to see the ethics of this school exist in other parts of the district. I’d like students to not dwell on how good they have it, but on what can be done to ensure that others are afforded the same opportunities. SLA is proof that school does not have to be horrible–that it can even be beautiful.”