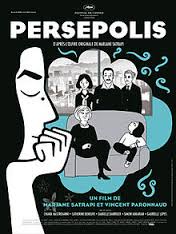 Quick: What do you know about the Islamist revolution in Iran? If you answered “not much” or less, than this movie is for you.

Persepolis is a French animation (in black and white) directed by Vincent Paronnaud and Marjane Satrapi, author of the autobiographical graphic novel with the same name.

The film describes Marjane’s life in Tehran with her family and friends. Always a “rebel”, her and her family are against the political regime and her parents protect her from ideologic troubles sending her to Austria. There, she experiences good and bad, ultimately deciding to go back to her home, ignoring her parents’ advice. Then she goes back to Europe, where she builds a new life far from her home-country’s conflicts.

This film is an excellent animated adaptation from the comic of the same name. Without very complex cartoons, it explains all the story with details, skipping some years, but describing all the situations that could happen at the same moment during her life, it often was: her own situation vs. the political situation of her country.

This animation shows the difficulties she has had during her life, and the different contexts she has experimented with along her childhood and later.

It shows how the Pahlavi Shah was supported by the U.S. government at that time, when Marji’s father tells her that American people “helped him to become the Shah of Iran and have the absolute power, in exchange for Iranian petrol.”.

His speech makes the spectator see the meanness and wickedness of the first Pahlavi Shah, and that his successor was even worse and more cruel than him. The Shah is overthrown in 1979. While the Iranian population are glad for having overthrown the Shah, the elections arrived. With people full of fear, Islamic party won with the 99% of the votes. They established Islamic rules that they have to be obeyed in a very orthodox way.

The movie also shows the restrictions and heavy rules of the new Islamic regime, when the parties, music, alcohol, and every kind of leisure festivity. Marji, for example, has to buy a punk-music CD illegally from people who sell them secretly. We can also observe the propaganda of both regimes, giving speeches in colleges, schools, and other institutions in order to convince people and make them have the same ideology as them.

An example is when Marjane is very young, and arrives at home she tells the story her teacher has told her pupils at the school, a version of the story that makes the Shah a good person, a good head-of-state. Thereafter, her father tells her the true story, which is almost the opposite thing. That’s an example of propaganda given to the population.

I really recommend you watch this film, it is very enjoyable, in some moments funny, educational, entertaining and easy to understand at the same time.

I think it is very educational because it shows different political contexts in first person, so the spectator can understand it better. You can learn about politics, Islam, Islamic extremism, and the situation in Iran influenced by their governments. In my opinion, the most entertaining aspect of the film was seeing her situation and taking her place for a moment. The film was turned into funnier thanks to the way they explained all the context, in a very realistic and direct way, but with some moments of humor that makes the film less as dramatic as it could be if it only talked about the Iranian revolution, Iran’s wars and pain, etc. Without this bit of humor, the film would turn into a mix of historical and tragic film.