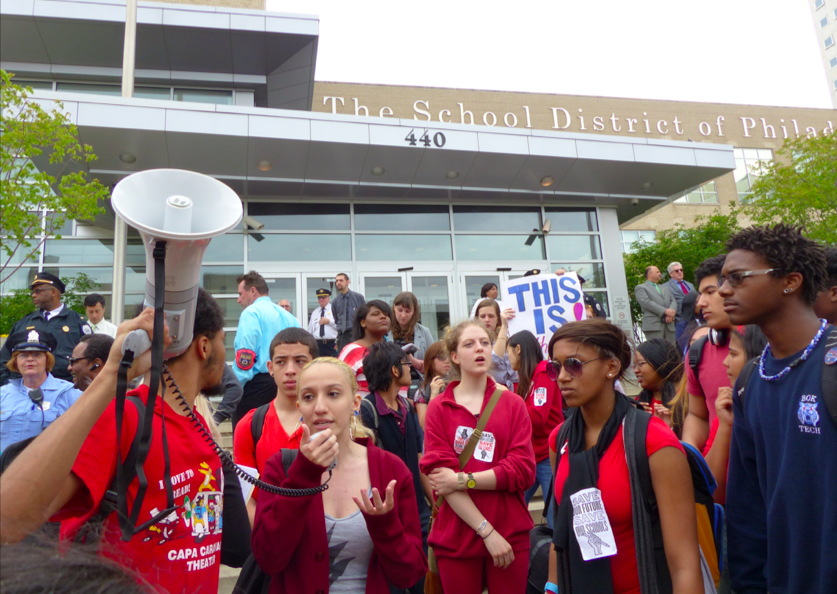 Students of the Philadelphia School District spoke out against the proposed extracurricular cuts for the 2013-2014 school year by leading marches from their respective schools to the District building at 440 North Broad Street at 4:30 PM this afternoon.

The marches were in observance of Teacher Appreciation Day. “There is no teachers involve, there’s already a rally for teachers–this is a student-led protest,” CAPA Junior and co-organizer Teyin Tseng maintained.

Feeling that there isn’t enough representation from students, organizers aimed to raise awareness within the student body by showing the public that they take the budget cuts personally all in hopes of attracting the attention of Harrisburg.

The march was a result of a discussion between CAPA students Gregory Coleman, Maureen Smith, and Teyin Tseng in the wake of CAPA being unable to fund their annual musical.

By use of social networking, the three expanded their reach to find leaders who could rally students at each school.  What resulted was a Facebook campaign that involved students from CAPA, Central, Masterman, Furness, Delaware Valley High School, Upper Darby, Palumbo, Bodine, and SLA.

The proposed cuts by the District include Pennsylvania Governor Tom Corbett cutting public education funding and a $300 million deficit for the Philadelphia public school system. Multiple teachers, counseling staff, and nursing staff are to be laid off as well as the cutting of afterschool sports, arts and music clubs, which would have a immense impact on many students’ school experience.

“It’s like the school district is telling students that becoming a musician or an artist is less important than becoming a doctor or a lawyer,” said J.R. Masterman representative Anea Moore, “Some students only come to school for sports, art, and music.”

SLA’s voice on the matter was less vocal at the onset as there was no formal representative at  SLA to communicate with other organizers.

Sophmore Nikki Adeli believes in fighting the budget cuts but doesn’t agree with this course of action, wondering, “What is the point [of the march]? Yes, the district knows that no one likes these cuts, no one does,” noting that if students wanted to fight the cuts they should sign SLA Principle Chris Lehmann’s petition that would ask local sports teams to help keep school athletic programs active.

“The protest today showed a strong sense of purpose, unity, communication, organization and passion in the youth of Philadelphia, ” said Freshman Leo Levy, who managed to tell his story publicly at the rally about SLA’s school nurse who spends her time tending to three different high schools. “The plethora of represented schools showed how this threat is being felt across the entire city, and even outside.”

The protest has galvanized Philadelphia youth, as rumors of a walkout on Thursday May 9th start to arise. The supposed walkouts are, however, not supported or affiliated with the organizers of the 440 March.

More is to be expected as Central High School representative Afaq Mahmoud told SLAMedia, “Plans are already going underway,” but noting they are unassociated with Thursday’s rumored walkout.