If you haven’t had the pleasure of playing a Nitrome game then you’ve done yourself a great disservice. Do yourself a favor and hop over to Google Play Store or the App Store and download as many Nitrome games as your device can store. If that sounds too extreme, lame, or you don’t have the time to play all their games then just drift your eyes downwards and let me pick for you. Because I, a Nitrome devotee, have played all their games and know which ones are the cream of the crop. 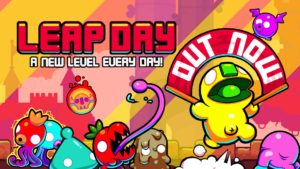 The energy this game gives me made me either want to run a mile or commit a murder. From the bubbly music that plays in the background to the chubby yellow character I started out as, ironically named Yolk, I always walk away feeling like a kid after Halloween.

Leap Day is simple to get the gist of, not like I got any instructions anyways, since there’s only one jumping mechanism. I have tons of hyperactive fun jumping my way up level after level whilst avoiding giant flaming skulls and weird tomato-looking monsters with whip-like tongues.

A new level is uploaded to the game everyday, one of the most charming mechanisms about the game, so getting bored of playing the same stage is never an option. Every day I get to bounce around as Yolk avoiding new monsters, looking at a new background, and listening to a new song. Though it doesn’t really matter what song plays to what background, the same game over buzzer sound plays when I die.

In lieu of that, constantly losing and hearing a stupid game over buzzing sound does really clear my mind to anything stressful. 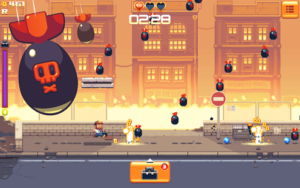 When I first started playing Nitrome games, back on Miniclip in Middle School, a signature feeling that I got was the feeling of utter confusion. Nitrome never tossed any guidance my way, I always got slammed into the middle of chaos. So I don’t know why I expected to get a tutorial with this one.

Basically, I avoid bombs falling from the sky from a armored warcraft. The thing I adore about the game is all the characters I can play as and their unique ultimate abilities. My personal favorite Jeff-Jeff, a trigger-happy dumpster dweller. He can wield a machine gun and shoot bombs out the sky. When I’m feeling more cowardly I play as Tucker. He’s the average Joe (pictured below) who can hide under his briefcase which, miraculously, is explosion proof.

There’s actually a plot too, another thing I enjoy. When I manage to survive through each stage, ranging from alleyways to football fields, a videotape would land among that bombs. Every tape, from every stage, was a slice of a story that told why an armored aircraft was randomly raging on a city. 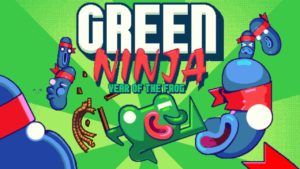 This one is my favorite to play out of the three. As a puzzle game, I get to attempt to wrap my head around what moves would get me to the next stage. Each stage is set in a pixelated dojo and epic action music plays in the background while I wreck house, or dojo in this case.

It doesn’t have a variety of playable characters, something I find disappointing, so I’m stuck playing as a frog. Yes, the title is very literal. My slimy character, who I have named Guppy, plows through each level beating the stuffing out of our shared ninja enemies. If I had to praise this game for one of the things above, it would be the satisfaction I feel each time I knock a ninja off a level. It may seem sadistic, but after the second level or so their smug faces really ignited a burning rage inside me.

The actual game mechanics, like in most Nitrome games, are pretty simple to understand. Guppy will kick or punch his way through just about anything but can only do so in a straight line. I can’t count the number of times I messed up a stage and couldn’t finish off the last ninja because they weren’t in my range.

They may not look menacing above, or smug for that matter, but believe me when I say they had it coming.

So there you have it, since you didn’t want to download all the games Nitrome has developed, still lame, you get to play the best three.