Bernie Sanders continues in his success as news get back that the Democratic hopeful won by 58% in Oregon and tied 49.3% to 49.7% with former Secretary of State Hillary Clinton. Sanders supporters are celebrating this victory, which follows a 51% win in West Virginia, but are wary of the “Super Tuesday pt. 2” to come on June 7th. South Dakota, North Dakota, Montana, New Jersey, New Mexico, and California- with a whopping 475 delegates at stake- all vote on that day, and their votes could make or break the election for candidates this closely tied. Currently, Clinton leads by 274 unpledged delegates. Like Sanders, she needs the June 7th primaries to work in her favor, especially considering that she has lost to or tied with Sanders in the last 5 primaries (except for the Guam primary, in which she won 4:3).
As the race heats up, every vote begins to matter (unless you’re a Republican, in which case Donald Trump has pretty much sealed the nomination). Send this out to your friends and/or family in any of the 6 states to vote on June 7th, and encourage them to vote! 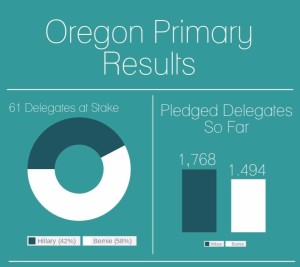 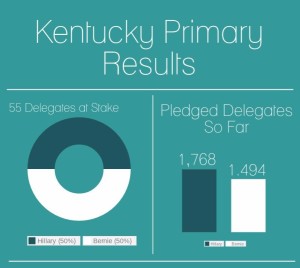