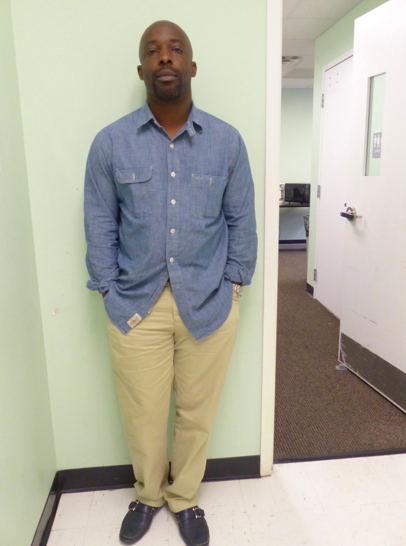 Starting in April, SLA has had a new adult in the office part-time. Many students found his presence intimidating at first — but as they got to know him, they found out that he was, as he described himself, “a teddy bear.” That person, Chris Johnson, is now going to be the Site Administrator of SLA’s new campus at Beeber Middle School.Chris Johnson has been touring SLA for 2 months.  SLAMedia sat down with Johnson to learn more about him.

How did you become the Site Administrator of Beeber?

It was, I guess, the perfect storm. I was the principal of Ben Franklin high school for 9 years. Then this past year, I took a position at [the] Central Office, where I was responsible for the climate culture and safety of the schools in our district. Because of budget cuts… my position would probably have been eliminated, so we decided that it was best if I started to look for opportunities around Philadelphia. Chris and I — who I knew ever since he came to Philadelphia — became close, because I guess we had the same idea on teaching and learning and how schools are run. And then we hooked up with this guy who was the principal of Central High School and learned a lot from it. It was a natural flow. he taught me inquiry, collaboration, the whole nine pretty much.

What are some of the expectations you have for the students?

Same expectation [Lehmann] has. To grow daily, for us to learn from our mistakes, and to make those mistakes and turn them into positives so we can be better people. I think at the end of the day, more than anything, Mr. Lehmann wants his students to be good people. So that’s why the advisory [program] is so important to him, and the relationship building that the staff has is so important to him. But at the end of the day, he really wants you to be good people. and I guys think you guys do a really good job at that.

What is the biggest challenge you think you face in opening a new school?

Time! We need more time, lady. If there was 36 hours in everyday, that would be help. We have to get a lot of things done. The other hard part is that since we are closing 27 schools and those children have to go off to other schools, the facilities department has to get the other schools ready to receive the children from the closing schools. They’re going to be swamped.

What have you learned from Mr. Lehmann?

Persistence, dedication, and the ability to go around barriers, there is always going to be barriers. but you have to find a way to go around them if you want to do what’s right for your kids. The other things i learned about him that he is a smart dude. I always called him a geek but if you sit down and listen, I’m like, dang dude, you’re actually smart.

What have you learned from SLA school culture that you want to bring with you?

I learned, I’m learning because it’s not all there yet…  I’m learning that you can learn so much from anyone, and that you don’t always have to be the bearer of knowledge, because you don’t know everything. Its okay to sit down and listen. It’s okay to learn stuff. I learned so much from kids, just from kids from the first two days I’ve been here. I also learned that I have to learn. I also learned you need to be transparent.