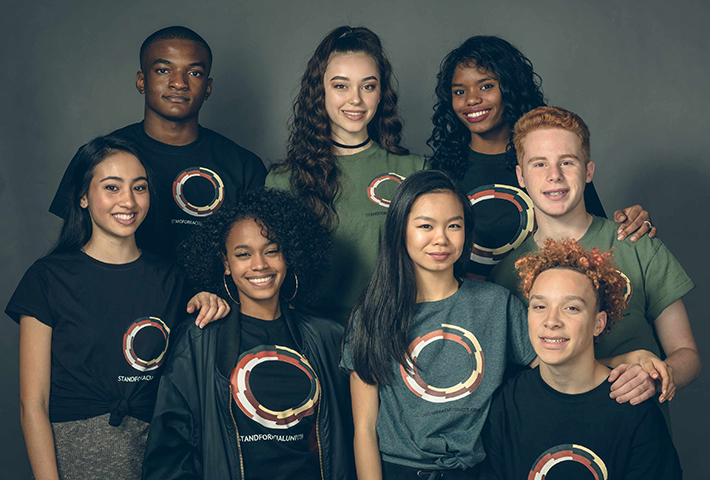 On Monday, January 9th, the Stand for Racial Unity campaign kicked off at SLA, with students going around to advisory explaining the emphasis of the work.

Sophomore Bronwyn Goldschneider created the organization after thinking about it for six months. She herself is of mixed race — her father is white and her mother is Japanese — and they felt that there wasn’t a way to bring people of different skin colors and backgrounds together.

“My dad and I discovered there was no symbol for racial unity,” Goldschneider explained, so they decided to make one themselves.

With the help of her friends and her father, who is a photographer, she was able to produce photos of students with of all different races and ethnicities. In the pictures, each person was given a shirt with the racial unity symbol. The stance everybody was placed in, made the photo very eye catching and powerful.

These photos have been floating around the school and on different social media platforms. Not only have these pictures been hung up on the walls of SLA, but it is also easy to spot stickers on the back of computers from students. They have been the talk of students for these past few weeks. Bronwyn and the rest of the crew have been getting noticed for their leadership and recognition for racial unity.

Sophomore Sydney Rogers was one of the students featured in the picture and appreciated the opportunity that the group gave her.

“It means a lot to me,” Rogers explained. “I’ve never been apart of a non profit organization like this. I’m really involved and invested in it.”

After setting up the campaign, Goldschneider chose the Southern Poverty Law Center as the group that would receive the proceeds of any t-shirt or sticker sales.

“They basically monitor all activity hate groups in the us,” Goldschneider explained. “They try to bring the message out that there are still hate groups and to be heard about and changed. Awareness for this is the goal.”

By donating online, you can order a T-Shirt with the racial unity symbol, and also, you are able to purchase stickers that can be put anywhere you would like.