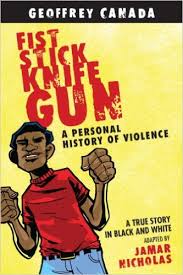 It felt like I was right there with Geoffrey Canada as he told his story in Fist, Stick, Knife, Gun: A Personal History of Violence.

Canada takes readers way back to the childhood of his youth to narrate multiple stories from his point of view about growing up. It was a rough journey which taught Geoffrey a lot along the way.

The story takes place in the 1950s and 1960s, when Canada moved to an inner city neighborhood in New York. South Bronx was the new home of Canada at a very young age. Canada lived with his younger brother, older brother, and mother. There was no father figure present. His mother was a hard working single mother forced to provide alone for her three children. The story provided insight on the norms of bad neighborhoods and also gave Canada’s perspective about things.

Not all bad comes from Canada’s moving experience, the neighborhood he moved to taught him multiple lessons that will stick with him for life.

The experience that Canada had growing up is something that I can relate to and I think many other young African American males in Philadelphia can as well. It’s crazy to see that things haven’t changed as much in the African American community regarding male youth. To this day I  know people and have friends who don’t have  their fathers in their life, or have never even met their dads, and are living in poverty.

The effect of this is clear: children are negatively affected by default from their adolescence. It’s sad to say that this is how things are and I personally don’t see a change anytime soon; this book has opened my eyes tremendously to the issues in my community. I have my own personal history of violence and I’ve had my fair share of fights growing up. This book made me realize that things aren’t so different in other places from my own.

Canada began his life’s work helping children who, like himself, grew up in poor, distressed neighborhoods. Canada is the president of Harlem’s Children Zone which supports kids from birth through college in order to break the cycle of poverty. Geoffrey Canada is an American educator, social activist and author.

Mr. Canada has written two books: Fist Stick Knife Gun: A Personal History of Violence in America (1995; reissued as a graphic novel in 2010) and Reaching Up for Manhood: Transforming the Lives of Boys in America (1998). A strong voice in public debates on education, he also has written for a number of publications, including op-eds for The New York Times and Daily News; gave a TED Talk on our failing schools and the need for innovation that was broadcast on PBS; and has spoken to audiences around the world about what it takes to help children succeed, from evaluation to early childhood education and beyond.