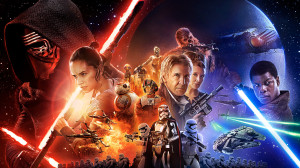 So, here it is. The review we’ve all been waiting for.r.  After the last few years of speculation  and feverish anticipation, I can say with confidence that the newest installment of the Star Wars movie franchise, the force awakens, is an enjoyable one- but with several faults. Interestingly, my feelings about these faults differ greatly from what many people at SLA feel about it- which puts me in the unique position of being the film’s review with some of the more negative thoughts on it. I’ll tread carefully to insure a major spoiler-free review.

To begin with the positives; this movie was a big treat in terms of throwbacks and references to the previous movies and plenty of eye winks that can appeal to occasional or die hard fans. This film also mastered comedy very well, better probably than any of the other movies and definitely played with some of the more common jokes in the star wars movies. The cast all did their jobs phenomenally- especially the leading protagonist of Daisy Ridley as Rey, who has become one of my new favorite characters within Star Wars and defiantly has a long bright career ahead of her. John Boyega was also solid as a reformed stormtrooper and had several good moments, bringing in most of the story’s comedy. Part of the fun also goes to the incredibly handsome Oscar Isaac’s charming portrayal of Poe Dameron that makes him infectiously likeable.

But it wasn’t only the new stars that stole the show as Harrison ford’s return as Han Solo was utterly wonderful and provided some of the best scenes and heart of the film.  From the returning characters like Carrie Fisher’s feisty former Princess Leia, Chewbacca, C-3po and more all make trumpet returns to the saga that immortalized them. The special effects were outstanding- even more so when you realize many elements were captured through real-life animatronics rather than CGI.

Now, some of the things I didn’t like. I felt that the recycled plot elements from “A New Hope” took away from the “new” aspect the movie was promising and gives me some worries as to how they will handle future projects. The mysterious big bad- Supreme Leader Snoke- was also not very exceptional. For all the secrecy about his appearance, he was not even intresting looking and, so far, a bland, motivationless appearing villain- with a quite frankly TERRIBLE villain name. I mean, Snoke? What are you, a dolphin or something? While he still probably has at least another one or two movies to prove his potential, there were a number of ways they could have made a lasting impression in his first appearance that they did not. One character made a departure in this movie as well.  I was not happy with how they handled his or her leave, although telling more about this would MASSIVELY spoil the plot. And another character that was hyped in promotional material was little used, and when used wasn’t being very effective.

When compared to the previously crafted worlds of the comics and books that took place after “Return of the Jedi”  these new movies (that replace this, cannon wise)  haven’t even met some of the originality and characters that they had.  And I will say that they had more than one opportunity to make references to that particular mythology or include it somehow, but they straight up did not, which felt like a massive slap in the face to those who loved read and knew about those . I will try to cover some of this in a more spoiler filled thoughts on the movie.

Overall, the Force Awakens is the biggest film of the year, possibly of all time, but that doesn’t make it the best. It was an enjoyable picture that deserves acclaim for doing what many thought would be impossible. In the words of Lucille Bluth, I encourage everyone to “Go see a Star War”.