André Gallagher Souza is the exchange student at SLA this year. He sat down with SLAMedia to answer a few questions about his background and what the transition to living in the US has been like. 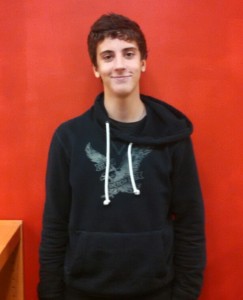 So you were born in Brazil right? In Rio de Janeiro?

No… Yes, in the state of Rio. But in a city called Petrópolis, which is 45 minutes from Rio [de Janeiro].

Oh its beautiful. The weathers better than here [laughs]. The girls [laughs]. What else? Yeah its great. Philadelphia’s cool as well, but I kind of miss Rio. My family, the way I knew everything in Rio. But here its so different. I had to get used to [it].

Had you ever been to America before now?

Was it hard coming to America? What was the transition like?

Good, because my mom’s American so I have both cultures- Brazilian, American. So, I know these people.

And so what was your transition to Science Leadership Academy like?  How is [SLA] different?

Do you want to live in America when you get older?

Oh yeah, I’m considering me college here so I think that’s a huge part of the life that I’m going to decide if I’m going to live [here] or not. But as in Brazil, to make college, it’s so much harder. If I’m going to make it here, I’ll see how it goes.

What do you mean, it’s harder to go to college in Brazil?

Because in Brazil the best colleges are public, which is opposite from here right? And it’s so tough to go because we have something called “Vestibular”, which is like the SAT, ACT. But it’s so much harder. It’s a bunch of millions and millions of students take it and it’s so much [more] competitive and harder. My brother in Brazil is twenty and he wants to be a doctor, but it’s so hard to be a doctor in Brazil so I think I’m going to go here.

So English is not your first language right?

You don’t speak English at home, even though your mom is American?

No, she fights with me because of that [laughs]. Yeah we don’t. Because my father doesn’t [speak English], so it’s kind of weird, we speak a few things with my mom and my father doesn’t understand. So we decided “André, I don’t care any more, you can speak Portuguese, I don’t care.” At the beginning, when I was young, my mom used to speak English and I replied to her in Portuguese. It’s not good, it’s not good for conversation. You just practice your listening, but the conversation [is] not good. You don’t learn how to answer the questions very quick and you need to take time to learn.

English is not your first language, so has that gotten in the way of what you’ve been able to do?

No, because once you’re an exchange student you need to take care of yourself so your family is not going be there every time, I don’t know. I think the first thing I bought in America, I bought a video game- PlayStation video game. And I went by myself, just with me, I say, doing sign conversation “Oh, I want this this this. Okay thank you.” Yeah, they- the [person] who sell stuff, he was very nice because he didn’t ask me a lot so I did not have to speak too much. But yeah, you get very mature when you are doing exchange because you can take care of yourself, you need to do everything by yourself.

Have you ever ran into any problems because English is not your first language?

Oh yeah- in school of course. In history and English, there [were] the biggest problems, but they are trying to help me. Yeah.

Can you give an example of a time when it was specifically hard in any of your classes?

Oh yeah, because I’m a senior here, [it’s] weird. I decide to go to America and already be a senior, it’s so different, you have a bunch of stuff to do, a bunch of work. A bunch of responsibilities- yes. And the history class for example, they were reading very fancy articles and texts and I was kind of like “I don’t understand this! I can speak with you guys a few. I know about basketball or video games, but when it becomes something about philosophy or psychology or history- when it becomes fancy- I’m not that good.” It was kind of struggling the first times. But the teachers are trying to make it easier for me and making a few other projects for [me]. I’m like “I can’t understand”, but it’s not something very special.