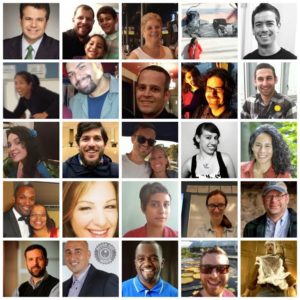 What should the teaching staff at SLA Center City look like?

Teacher diversity affects the entire school community in some way, shape, or form. Racial diversity in education has been a huge topic in recent years. Publications like Mother Jones have reported about the pushing out of black educators in Philadelphia and other cities. So how does SLA Center City ’s staff stack up? Should it be more diverse than it already is?

Teachers have mixed feelings about this situation. Physics Teacher BJ Enzweiler said that SLA Center City is “not as diverse as we would like to be”.

Junior Saamir Baker is an African American male who feels his education is impacted by this situation.  “I wish there were more Black male teachers that  could relate to what I  was personally going through on a racial scale.”

White students also wish for more diversity. Junior Eli Block was asked if SLA Center City  had enough Black teachers. “I wish we had more teachers with different backgrounds so that could mean more diversity, or people who aren’t so generic — Black, White, Hispanic or whatever.”

All students interviewed for this article has the same viewpoint: that the SLA Center City  teaching staff is not as diverse as it could  be.

So how does the administration feel about this?

Principal Chris Lehmann agreed with the students: “I don’t think it’s a good thing that we only have three African American Teachers.”  He noted that nationwide, fewer African Americans are going into the teaching profession, which makes it harder to find new staff to hire.

Mr. Lehmann described that the hiring process at SLA Center City  is very particular. The hiring team usually consist of everyone from that subject department, any other staff that choices to sit on and one SLA Center City Student and parent. In describing this process, Mr. Lehmann stated that there has been times where the hiring team came to a consensus to not hire an African American teacher that Lehmann was very interested in.

Acknowledging that SLA is small, with at most a couple of teachers hired every year, how does it balance its need for educators qualified to work in this kind of school with it’s need for more African-American teachers?

“Hiring is never a perfect process, it depends on whoever is available during a given season.” Said English teacher Larissa Pahomov, who sat in on most of last year’s hires. “Last year was made even more difficult by the fact by some positions we could only hire teachers that were currently employed by the School District of Philadelphia.”

This situation continues to get attention not just within the school, but nationally. Now-graduated student Noah Caruso was interviewed by Melinda Anderson in the Atlantic Magazine.

“Now a rising senior, Caruso looks back with appreciation on his ninth-grade year in Kay’s class. “He’s the most inspiring teacher I ever had by far,” Caruso said, recalling Kay’s emphasis and commentary on fraught topics such as present-day racism. “He definitely pushed us to really think about these social issues [that] weren’t talked about before in my life because everyone grew up in the same area,” he continued. “We were all white … and everyone had the same opinion.”

This article is the first in a series exploring issues of diversity at SLA Center City . A future article will talk to the African-American teachers on staff. Keep checking SLAMedia.org and follow us on twitter for a follow-up interview on the lack of teacher diversity at Science Leadership Academy at Center City and in the School District of Philadelphia.