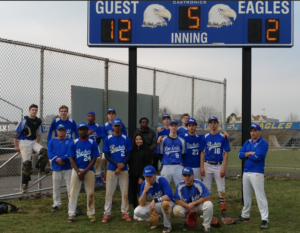 When you first step on the baseball field at Vare Recreation Center, it’s clear that the space needs some work. Whether it’s the dirt bike tracks ripping the outfield or the stunningly short right field fence, the field is not ideal by any means.

But Vare is the home of the SLA Rockets’ baseball team, where they take the 20 minute ride on the 7 bus almost everyday of the week. It’s where the seniors on the team have been since their freshman season. Over those four years, the team has compiled back-to-back undefeated regular season records, earning them a chance to compete in the A division during the 2016-17 season. Their home games at Mt. Airy Playground on Germantown Avenue equate to a 30 minute drive.

This long commute is the reality of public school baseball, especially at SLA, where the school has no athletic facilities attached to the building. Finding suitable space has been a constant struggle.

At first it was the job of Athletic Director Matt Kay to find these facilities for sports teams. But about “4 or 5 years ago,” Kay decided that it would be best for coaches to find the fields themselves.

Head baseball coach, Doug Herman, was responsible for the search to find a field at the beginning of the program.

“When we officially formed our team in 2009 the Public League didn’t provide us with a field,” he said. “When I asked they said it was our responsibility to find one. I politely pushed back on that and the PIAA Baseball Chair at the time secured us a field.”

That field, located in Northeast Philly, was almost an hour and a half away during afternoon traffic. There was no way to check if the field would be playable or not after a night of rain. Without any way to check the condition of the field, Herman had to pass on the offer and for the first four years of the program, SLA was field-less for games and practices.

The public league holds around 45 baseball teams and almost one new team joins each year, making the need for fields is abundant. Still, 6 of the 13 teams in the Public League’s top division, the Independence Division, do not have fields at their school. The number just lessens as you descend upon the divisions, where it is even tougher to secure a field without a historic program.

Barry Strube, the District 12 Baseball Chair, commented on the rules for securing facilities, saying, “Neither PIAA nor [Philadelphia Public League] has anything to do with finding fields. The PPL provides supplies to assist in maintaining and lining fields but getting them is up to each individual school.” However, he did add that, “the school district and Philadelphia Department of Recreation have a partnership where each allows the other to use their facilities without charge.”

So, as a result, in the subsequent years, the team practiced at multiple locations, trying to find any patch of grass they could use to get the proper amount of work in. The third year called for celebration, as Herman finally earned a permit to use the Von Colln Field at 22nd and Parkway from the Fairmount Park Association baseball league.

Unfortunately, when the season started, Herman and the baseball team were met with anger. The Hallahan softball team had been using the fields.

“They claimed our permit wasn’t valid because we were a new team,” Herman said, “and that any team that had used the field prior has ‘right of first refusal.’”

Herman and the Rockets were denied the right to the use field and as a result, were field-less for the first four years of the program. In the meantime, they would sometimes use fields in South Philadelphia like Smith Playground and Marconi Plaza, until Herman crossed paths with Dan Winterstein, a retired high school teacher and baseball coach. In addition to agreeing to be the JV coach, Winterstein offered allowance to the use Mt. Airy baseball fields on occasion. Those fields have now become the home field for the Rockets.

With a home field secured, Herman turned to the issue of where to practice. Through connections, Herman scratched up the South Philadelphia field at 26th and Morris. While the baseball program has significantly improved resources since 2009, it still not at the place that compares to other top teams.

The question is, with more and more schools being founded, how can enough resources be provided for teams like SLA for the future?

Kay recognizes that athletic facilities have not caught up with the trend of smaller schools.

“How it’s set up now worked fine in an era of big neighborhood schools. All of them were self contained with their own fields and gyms,” Kay said. “But [not] with all of the SLA’s, Constitution’s, and the 4 billion charter schools that are in office buildings. You no longer have 4,000 kid schools, [which] were built to give kids all of the things they need.”

Kay dreams of a world where the school district would create more athletic “supersites.” There are a couple in the city, including the Gratz Supersite and the South Philadelphia Supersite, where the Rockets played in their Final Four game two years ago.

“I think we could put 2 or 3 of them in the city, especially when I think about the stimulus money and other money that was wasted on other stuff,” said Kay. “That’s now gone and there’s no results and you played staffing and and then you have to fire those people with temporary money, it was all stupid. If we would have used that stimulus money and any other money to build two or three Competitive Edge style supersites where three or four schools could have home gyms there.”

In the meantime, Herman hopes that the baseball team can secure some of the fields of local college baseball teams when they aren’t playing. He cited Temple, Penn, and Drexel as possible landing spots specifically, as Temple destroyed their baseball program a few years ago and Penn and Drexel are a less than 15 minute walk from SLA.

It may not be right in the school’s backyard, but it’s more than a big improvement from not having a field just 5 years ago.