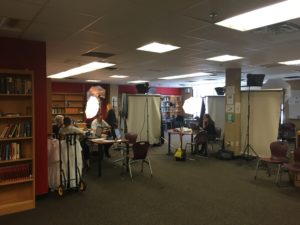 This year at Science Leadership Academy Center City, class of 2018 seniors will be taking their senior portraits on June 8th and 9th.

These students will still be juniors while taking their senior pictures which creates confusion for some people. When this confusion was expressed in class, Journalism teacher Larissa Pahomov exclaimed “It’s always good to do things in advance.”

Senior Kayla Cassumba who took her senior pictures last year said, “I did want to take the photo, I had to make sure my hair, makeup, and nails were done to get a cute picture. The process took about 10 minutes but it went by pretty fast. I remember doing 5 different poses and I was able to choose which one I wanted on a website. Overall I did it because it was one step closer to graduating.”

“What excites me about senior pictures is that I can finally say “I’m a senior,”” said Junior Jaszmine Randle. “And I think it’s a good idea that we’re taking them this early so that the pictures are ready for the yearbook when that time comes, while also giving people to have time to get the money to purchase them next school year.”

With great help from this year’s yearbook coordinator, Pearl Jonas, some valuable information was discovered.

One thing that concerned a few people was whether the females would be able to wear either the pre-set male attire or pre-set female attire. In past years, the photography studio has sometimes resisted the request of a student to wear the “opposite” clothes that are designated for their gender. Can students switch it up?

The answer to both questions is yes. Without hesitation, rising seniors will have the permission to choose what pre-set attire they would like to be photographed in.

Seniors will also be able to refuse the picture taking process by simply not attending, but for convenience Ms. Jonas would prefer a head’s up prior to picture-day to clear up confusion and/or any unnecessary issues.

When it comes to the editing process, a majority of it is left up to the editors of the photography studio. However, students are allowed to choose which picture of themselves they would like to be featured in the yearbook.