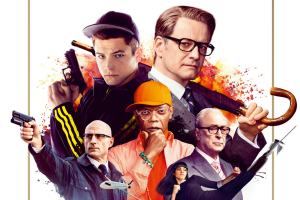 Nice suits, handsome men, action, puppies- what more can you ask for? Unlike most modern spy movies, Kingsman: The Secret Service doesn’t take itself too seriously, and that part of its appeal. Its completely and purposefully on the nose and willing to play around with the typical spy movie tropes: – a maniacal villain in a secret lair in the mountains, a gentleman spy, secret gadgets, and more.

The film centers around ‘Eggsy’ Unwin, a young man who looks as if he’s due for a life behind bars, when he is taken under the wing of Harry Hart, whose life was saved by Eggsy’s father. Eggy’s father, like Harry, was a member of the dapper british spy agency known as “The Kingsmen”, whose headquarters is located inside a tailor shop.  With training, Eggsy and Harry must save the world from insane internet Billionaire Richmond Valentine and his talented assassin gazelle, who has knives on the ends of her prosthetic legs, as he plans a global culling of the world’s  population.

The ensemble cast was great. The fearsome Samuel L Jackson as this lisp spouting villain who can’t stand the sight of blood, the calm Colin Firth as this badass bar-and-church-fighting-double-breasted-suit-wearing spy, and a big treat comes from the newcomer Taron Egerton, who was able to do heart, comedy and action all extremely well. This kid’s got a long career ahead of him.

I will warn you: the film is very very violent with many deaths.  However, the violence is typically so over-the-top and impossible that it’s often , if not always played for laughs. It is worth noting the costuming in this film, as Harry Puts it “A suit is a modern day gentlemen’s armor, and the Kingsmen are its knights” and boy is beautiful armor, and this is coming from someone who wears suits everyday. The suits are double breasted, which purposely contrasts and makes them far more unique than the typical single breasted suits of spies and each one shows real quality. And even those who weren’t wearing full suits all the time like tech wizard Merlin’s sweater, Valentine’s unique look and sneakers and Eggy’s also unique vibe. In fact I also quite liked that the director made an actual clothing line for many of the suits in the film, which I hope can be done for more fashion-trending films, and they can be found the the Mr. Porter website (fair warning though, its expensive).

As I mentioned the film had some great mixture of elements like with humor and drama  (though mostly humor) that others don’t have as much. An example of another like this would be the latest Bond movie Skyfall which, while mostly dramatic was able to poke fun at itself and led some laughs, while (and I haven’t seen this myself) an example of one that doesn’t have as good mixture would be Taken which can be overtly gritty without managing a balance.

Go see this movie. In fact, reserve some time to go see it a second or even a third time- it is just that good, the kind of entertainment  that a lot of people can find something to enjoy. You can see it with family, friends or even a date.

In fact because, I’m so insistent on everyone treating himself to this movie, here’s a link to fandango below if you’d like to buy tickets to this great piece of film:

So please, in the words of Tom Haverford and Donna Mingle of Parks and Rec :”treat yo self”.