In two years, the Scholastic aptitude test, or SAT that many high school kids take every year in order to get into college, will be changing. Meaning that this years ninth grade students will be the first students to take the new SAT.

The purpose of changing this standardized test is so that more students will want to take it instead of taking the ACT test, which is becoming more popular among high school students, because it pertains more to what they are taught in school in modern times. The SAT used to be more popular, but that changed in 2012 when 1,666,017 students took the ACT, but noyl 1,664,479 students took the SAT. Writing an essay for the new est will be optional, and it will include vocabulary words that todays high school students actually use. The point of changing the SAT is to make it more relevant for today’s students.

The goal of inplacing these changes to the SAT is to make the test more relevant to todays high school students. This may seem like the people in charge of the SAT are trying to help students, but there’s more to it than that. Students have the option of taking the ACT instead of the SAT. The SAT used to be the one that students usually took, but now the ACT is now taken by more students than the SAT. People wanted to increase the SAT’s popularity among students.

In many ways, the new SAT will be easier than the old one.Because the essay component is now optional, the test will be scored on a 1600 point scale, instead of a 2400 point one. To make the test even easier, students will not be penalized for wrong answers, whereas before wrong answers caused students to lose 1/4 of a point. Some students will also have the option of taking the test on the computer.

Some people think that the new SAT is easier, because there is no essay requirement , and it doesn’t take away points for wrong answers. Not penalising wrong answers gives students the ability to guess answers that don’t know without risk. This will lead to much better scores. Not having an essay requirement seems to imply that today’s students can’t write as well as they used to ,or at least don’t want to. Is this a new test for a less challenged generation, or is this helping the students of today?

Even if the new SAT is easier, it won’t make college admissions less competitive. If students get higher scores on this new test, than colleges will want to accept students with higher scores. The SAT score  bar will be raised. How good an SAT score is is based on how it compares to every other student in the country. SAT scores are judged on a national curve.

As individuals, high school students don’t have any say in how these standardized tests work. “You can’t fight the way that it’s done.” says SLA senior Dejah Harley. But Americas high school students as a whole managed to cause this change in the SAT to take effect by preferring to take the ACT, so as a whole, we do have some influence.

Many of us have mixed feelings about the SAT. We understand its importance, but it is a burden for high school kids to take, especially at a school like SLA where we don’t take that many tests. The SAT is just a part of the college admissions process that we just have to accept.

The new SAT is supposed to work better for a modern generation of students. The SAT is being changed to make it more popular. This will change the college acceptance process for high school students in America. 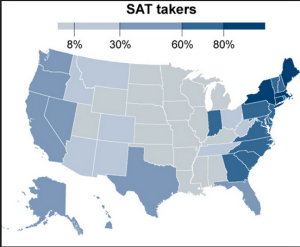