Eli Simon sat in the car on the way to his grandmothers. He sat in the back of the car, legs up, engulfed in his cell phone. He bit his nails as he read off of his phone.

“‘Most of their team is from New Jersey. #taneycheats’”

He mockingly laughed at the remark, but deep inside, Eli worried. Did they really cheat? Were there kids on his team really from New Jersey? Would Little League stop them from moving on? He knew they hadn’t cheated, but these Instagram posts and comments were giving him second thoughts.

Amidst the thousands of followers, TV appearances, and Little League World Series stardom, the Taney Dragons did not have an easy road to the Little League World Series. In their first tournament against teams from their district, second baseman Jahli Hendricks supposedly threw his glove on the ground and was ejected from the game. He would not be allowed to play in the next game either. Luckily, they won both games. After winning the Sectionals tournament and moving on to the State of Pennsylvania tournament, Taney faced another dilemma.

Starting catcher Scott Bandura and Hendricks had other plans the week of the State Tournament. Months before, Bandura’s father had secured the two of them a scholarship to attend a prestigious sports camp in New Hampshire. This opportunity could not be passed up on, so the Dragons would have to win without two of their most productive players.

As a result, the Dragons went into the tournament a little staggered.

“I didn’t think we would go far,” recalls Simon, while noting it would be hard to win without Bandura and Hendricks.

Fortunately, the Dragons won their first two games and went on to face the boys from Collier Township. In the fight between the two unbeatens, Taney punched first, winning the game in a fierce 13-10 victory. Therefore, the Dragons advanced to the finals, only to face Collier again after they had won. Only two team teams remained.

The state bracket was set up in a double elimination format meaning they would have to lose twice to be officially out of the tournament. The first game of the championship Collier won, routing the Dragons, 7-2. Not only was this the first lost of the tournament for the relentless Dragons, but this was also their first loss of the season. They would play Collier one last game for all the marbles in the jar.

Midway through the State Finals game, Collier surged to a 4-0 lead over the Dragons. It looked like this fabulous adventure might finally come to an end. But the next half inning, Jared Sprague-Lott answered the call ripping a two run homerun over the fence to cut the lead to 4-2.

In the next inning, with two runners on base, Spearman came to the plate. “I was just trying to take my time and recognize the pitch,” he said, recalling the event.

Luckily, Spearman launched a ball over the right field fence, pushing his team to a 5-4 lead. The Dragons never looked back and went on to win 6-4, punching their ticket in the Mid-Atlantic Regional tournament. They were only a few steps away from the Little League World Series. The kids began to look ahead to the next tournament, while celebrating their fabulous victory behind them. But this was quickly interrupted. 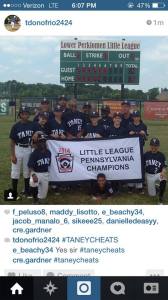 Hours after the game, many Dragons had their joyful evening disturbed. As first baseman Joe Richardson scrolled through his phone, he was tagged in a comment on Instagram. He looked on the notification bringing him to a post by one of the Collier players. The caption to the photo was “#taneycheats”.

The players from Collier began posting more and more photos with captions of “taney cheats” and “the real state champs”. Along with the photos came loads of comments. Multiple were mean and demeaning.

Richardson instantly informed his parents, who relayed it to coach Alex Rice. An email was sent out to the parents of the team asking them to tell their children not to respond or retaliate in anyway to the posts. It was hard not to say things back.

Under Little League rules, players must live in the township they are competing for. In their posts to Instagram earlier that day, the kids from Collier questioned if the Taney players actually lived in Pennsylvania. 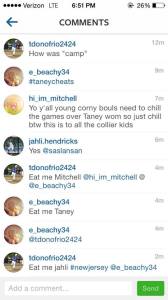 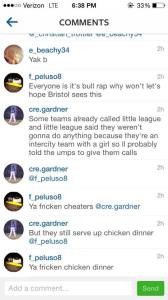 This rumor had its roots in the fact that, months ago, Sprague-Lott had been chosen for the 12-and-under United States baseball team that was competing in the Dominican Republic. As a compliment to being chosen, each player received a bio on themselves, and in that bio, the people running the site accidently stated that Jared was from New Jersey. This was a mistake by the website, Jared lived in Philadelphia. But the Collier kids found this and pounced on it.

As the comments and posts kept flowing, the more mean and hurtful they became towards the Taney players. The kids claimed that Taney had been cheating for a while and other teams had noticed: “…and little league said they weren’t gonna do anything because they’re an intercity team with a girl so [they] probably told the umps to give them calls” said a Collier player on Instagram.

Later, in response to many of the comments, one Collier player said, “But they still serve up chicken dinner,” when referring to the Taney players. Another player on Collier responded “Ya fricken chicken dinner.”

Many of the players were surprised, upset, and hurt. For Spearman and Richardson, this was the first time they had witnessed any sort of racism in their playing days of baseball.

At first, Spearman said he was mad at the comments, but he soon got over it just like many kids on the team. Richardson says it gave him and his teammates a chip on their shoulder and an opportunity to prove people wrong. Many teams could crash and fall when faced with these sort of dilemmas, yet the Dragons kept fighting. They would go on to advance to the highly touted Little League World Series.

Today, the Collier Little League organization has publicly supported the outcome of the game. “CTAA is happy for Taney Little League and we believe that Taney won fair and square,” said the 12U commissioner for Collier Little League, Steve Alauzen. He also noted that the coach of the Collier State Tournament team would not be allowed back into the organization if he even wanted to rejoin. He added that the comments by the players on social media were “inexcusable”.

A couple days after the posts on Instagram, the pictures were taken down along with the comments. Aside from screenshots, the “Collier and Taney Instagram Incident” has been erased.

When asked if he forgave Collier, Eli Simon hesitated, looked around and thoughtfully said, ”I really don’t care anymore. It’s over.”