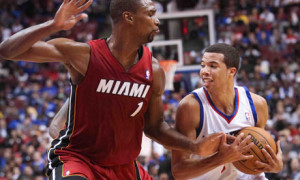 The Philadelphia 76ers season has started with a boom. They quickly became 3-0 beating three of the best teams in the NBA with what appeared to be ease.

Finally game four, their gameplay began to fall apart and even looked sloppy at some points. They finally began to look human. Ex-sixer Andre Igoudala seemed unstoppable against his old team, looking like possibly the best player in the league during that game.

It was widely believed that the Sixers both should and would tank this season on purpose in order to land the highly coveted NBA prospect Andrew Wiggins. After the first three games the game plan seemed to have changed.

Michael Carter-Williams has been the surprise of the season. He has played like an absolute super star. This was shocking especially considering he was in my opinion the Sixers’ third choice in the draft. After they traded Jrue Holliday away for Nerlens Noel and New Orleans’ 2014 first round pick, I thought they wanted college star Trey Burke, but Burke was taken two picks before them so they had to settle for Carter-Williams.

Settle may be the wrong word considering how good MCW had been for the Philadelphia basketball team. Experts have been comparing the Syracuse rookie to legend Magic Johnson, which is quite an impressive comparison.

So here is the question, what do the Sixers do? Should they tank, or should they try to win it all?

Whatever the decision will be they need to make it soon. If they keep winning they will quickly lose the option of drafting Wiggins. Some people say that the Sixers are one star away from being the best team in the NBA. If speculation proves true, Wiggins could be that star.

The interesting thing is that most Philadelphia fans wanted the Sixers to fail and all other Philadelphia teams (Eagles, Phillies, Flyers) to succeed. Of course the opposite seems to be true considering the other teams have had very disappointing seasons (which is a generous way to put it). Meanwhile the Sixers have saved the honor of Philadelphia sports for the first time in a long time.

Philadelphia might be the city with the biggest differential between fan adoration and love towards their teams and the talent that those teams possess. The entire franchise of Philadelphia sports is on the bottom, while fans continue to sell out games and follow their teams with vigor.

The Sixers are legitimate contenders, and it’s only a matter of time before they either figure that out and try to win it all, or decide to tank. It appears that at this rate if they really want to get Wiggins, they are going to start trading away players. I speculate the first to go will be Spencer Hawes. I personally think that the Sixers should tank especially considering that they have finally been brought back down to reality. The NBA is the only professional league that relies on stars, and this may be the Sixers only chance in a while to get one. I can only imagine how good they could be with Andrew Wiggins.

The Giants have had possibly the most disappointing year of any team in football. This week they are playing the Oakland Raider, the same team that was absolutely demolished by the Philadelphia Eagles. If Riley Cooper can grab three touchdowns against this team with the ball being thrown by Nick Foles, I can only imagine what Cruz will do getting the ball from Eli Manning.