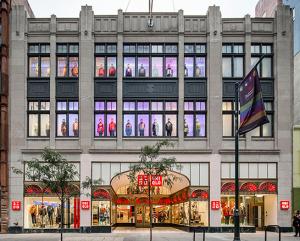 My summer was filled with sounds of drilling, hammering and more drilling. My condo shares a wall with the former Art Institute, which was undergoing construction last summer.

On October 3rd, the curtain lifted, or rather, the wall barricading the building came down, and in place of the Art Institute was a UNIQLO store. Replacing the drilling was loud Japanese pop music. It felt like I was living next door to a club.

The opening was at noon. People started lining up around 8am. The line reached around the block.

The event featured authentic Japanese street performers, an appearance by an important looking Japanese woman, and a spinning circle similar to a bingo ball turner containing three gold balls mixed in between ordinary white balls. The objective was to turn out a gold one and win a prize. The first three days of the opening yielded periodic “whoos” as somebody had landed a gold ball.

The huge buzz surrounding UNIQLO’s opening confused me. Sophomore, Harry Freed suggested, “I think UNIQLO buzzes like a bee because of Glen Howard and his chiseled jaw line.” I walked outside the day after the grand opening and everyone around me was carrying a UNIQLO canvas tote bag. It was like Invasion of the Body Snatchers, was I next?

I was. I resisted wanting to fight the trend. What broke me was the same reasoning which drove every other person to stand in line for the grand opening:

The promise of something new and different.

Compared to Michael Kors and Timberland — both with stores in the same neighborhood — UNIQLO feels a bit exotic. Founded in 1949, it started as a men’s clothing store, by a different name, expanded by selling unisex clothing and by the 80s, had adopted the name we’ve recently seen printed on banners lined up and down Chestnut Street. It wasn’t until 2006 that UNIQLO’s first flagship store debuted in the US, specifically, Manhattan.

So why has Philadelphia, the fifth most populous city in the United States, just caught the wave?

LA and New York are the obvious first locations for opening a store in the US. They’re the most populated cities, they cover both ends of the US, and they’re fashion culture hubs.

Obviously, the politics of international culture and marketing are quite complicated. The markets in both Japan and the US may have things in common; the age demographic is the same (age 20-30) and the clothes sold here are duplicates of what are sold in Japan.

However, one major difference is the racial demographic to which the clothes are oriented towards. To use the time-honored cliche, the US is a melting pot, filled to the brim with different ethnicities and body types. Japan is made up of primarily one body type, and that is Asian.

Banana Republic, for example, offers t-shirts in size small, but there are five different kinds of smalls in order to account for all of the possible body types: wide small, narrow small, short small, and the list goes on.

If Japan wanted to expand locations to Sweden, where most of the population is tall and skinny, UNIQLO would have to alter clothing to Swedish proportions. Being such a mixed country, we don’t consider these standards.

During the 80s, my dad spent four years in Japan, and a problem he was constantly encountering in Japanese retail, was that the same brands which fit him in the United States, in both length and width, were shorter in Japan. It’s clear that the dimensions of Japanese manufactured clothing will need to differ in the US and that variety is more important than it is in their home market.

With markets in mind, the Japanese UNIQLO faces different competition than US UNIQLO. While UNIQLO is competing with the boho-tone of the already established Free People, Free People, having just opened a location in Japan, is no competition for the trendy UNIQLO. UNIQLO seems to be entering a different market in the United States.

Fashion is always pushing the boundaries, searching for the new look, but what we’ve found in UNIQLO a creatively recycled style, both retro and familiar as well as current.

As Eva Karlen, sophomore, puts it, “It’s naive to say that UNIQLO is anything new or unprecedented.” Opening a store, transversing globally, is an opportunity to participate in a global culture. UNIQLO is just like another H&M, with a splash of Asia in the label.

The question I know has been burning in your minds, is what does UNIQLO even mean? Karlen suggested, “‘Uni’ means one, and ‘clo’ sounds like ‘glow,’ so one glow, so it means the sun.” Harry Freed offered a different approach. “UNIQLO sounds like maybe one clothing.” The actual meaning behind the name is a bit closer to Harry’s definition. It’s derived from the English word “Unique,” and loosely integrates our word for “clothing.”

Whether you come for Glenn Howard’s chiseled chin or a pair of heat tech socks, stop by the UNIQLO on 16th and Chestnut and decide for yourself if we really need or even want another clothing store in the neighborhood.