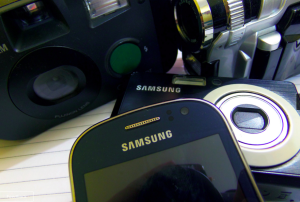 You sit down at a job interview and everything is going well. You are able to get your sentences out eloquently, and the person interviewing you seems to fancy you. This is, until the interviewer asks you to hand over your Facebook password as part of a company policy. This is an entirely legal thing that the company is asking you to do–the amendment that would make this practice illegal in the Cyber Intelligence and Sharing Act was struck down in April. What is your next move?

Many students on our editorial board report that they diligently self-police to avoid anything that they wouldn’t want their grandmothers to see ending up on the internet. Some claim that they don’t want to miss out on future college and career opportunities for having a shoddy internet profile. Our editorial board agrees that it is to our disadvantage that we are growing up and making mistakes while at all times it is possible for all of those things to be documented and shared on the internet–following us into adulthood even. But it happens whether we like it or not–how can students do a better job of monitoring what they put online?

A response to very public social networks that have become the norm, Snapchat has been the answer to a generation’s distaste with the information that they themselves put out in the internet. Snapchat is an image sharing service where you can send pictures person to person, that automatically delete when opened after a preset amount of seconds. This service was created out of necessity to prevent images that people want to share become unwanted permanent online fixtures. As everyone knows–once you put something on the internet it no longer belongs to you, anyone could have it and it could be anywhere on the internet after you put it up.

AskFM debuted as an anonymous question and answer service for friends, but the anonymity creates  uncomfortable moments when inappropriate questions are asked. People anonymously and commonly throw insults and remarks about sexual orientation, the site is infamous for this. If people know inherently that this could potentially happen to them, why do they sign up. Is it the responsibility of the user to control what they let themselves become susceptible to? In theory this service has an actual use, but in practice it just seems to lead to bullying and other harassment.

Often we think of personal or private things getting out over social networks, but sometimes email can be the culprit too. Files and text we send in email in it’s own way can be shared. Take this example of a girl at Duke University in 2010. She made a PowerPoint of guys she had slept with and emailed it to three friends.

Using Snapchat is one way to avoid permanent documentation of your life online. Here are a few more tips:

– Using efficient self policing and going by the rule of thumb, “Don’t post anything you wouldn’t want your grandmother to see.”

– Lock your accounts if you want to post anything you want

Doing this, we can all keep ourselves safer online and out of Lehmann’s office once and for all.