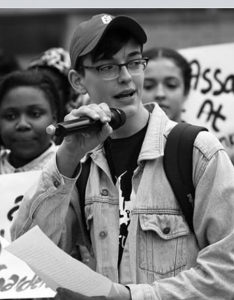 While many believe that Dr. Hite is in charge of the district, but really he reports to the School Reform Commission(SRC). Dr. Hite’s primary function is to run the district on the day to day basis. He has no control over policy making or decision making.The School Reform Commission (SRC) is the entity that’s really running the district. The SRC has had a 15 year history of making decisions that have negatively impacts our schools. The school system in this city has lacked control for too long.

The SRC was founded in 2001 by the state of Pennsylvania to take control of the Philadelphia schools. The reason given was that the Philadelphia schools and School District weren’t performing sufficiently. The true reason for the underperformance was the underfunding and a lack of property state support. The state decided that a Commission of appointed members, who weren’t from Philadelphia, would be better than local say in what happened to our students.

The SRC is made up of 5 members appointed by both the Governor and Mayor. They do not get paid but may enjoy a fair amount of political capital. These five members hold meetings, both public and private, to make decisions on every aspect of the district, from funding to school closures.

The issue is that the SRC has failed to represent the interests of the students, teachers, and school community of Philadelphia. They enacted mass school closures, gave dozens of schools to for-profit charters despite community objections, failed to give teacher a contract or any raise in years, and more personally are moving SLA to a non center city location in the very near future. These and a host of other bad decisions show us that the SRC is not only fundamentally unfair because it denies citizens local control of their own district, but also has failed to operate in the interests of the Philadelphia community.

The way to abolish the SRC is to have them hold a vote in which they disassemble themselves. Three of the five members must vote to disassemble it to pass the action. The SRC position like any other government position, runs on terms. Three of the five members were up to be reappointed in January. Now it has developed that two of the three are resigning earlier. Feather Houston, one of the three,  has already resigned, she’ll be followed by Marjie Neff next month and Sylvia Simms in January. Basically there are three seats open to get people who would abolish the SRC onto the SRC. By pressuring Mayor Kenny and Governor Wolf to appoint people who will vote to dissolve the SRC, we can fill those 3 positions, have a SRC vote on local control with majority in support, and we’ll regain local control!

After we regain local control there are many questions about what comes next, but the first step is that the decisions will go to a mayoral appointed board. The public still can’t vote the members directly in, but in this model education will be a major issue on the mayoral ticket in the future so we can hear mayor’s positions on who they would appoint and what their education vision would be. This allows the public to consider these factor when going to vote. Also if we had that local control then we could formulate a system where we could vote for the members.

We should all care about this issue. The SRC runs our schools and makes the decisions for our schools and has failed to better our education in Philadelphia. Closing schools, cutting programs, and turning a blind eye to the calls for help from the school communities, the SRC has been a negative force on our education. For students here at SLA the decision of where our building is is up to the SRC who has shown their view is in favor of moving the school despite the voices of the entire SLA and large education community. It’s time for the SRC to go and we can make it happen!

Get involved by connecting with education organizations. Education Matter, Working Educators, and Philadelphia Student Union are three very strong organizations in our SLA community that are working on this issue. Stay in the loop and show up to the protests, townhalls, SRC meetings, and other events that will keep the pressure up on Mayor Kenny and Governor Wolf. Follow these organizations on social media, talk to everyone you know about what’s going on, follow the news as everything develops, and make calls directly to the mayors and governors office and tell them your position. We need to stay engaged and active in our education more than ever to regain control!