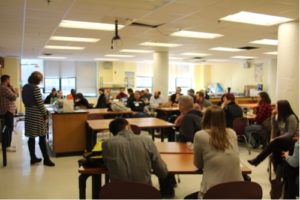 In January, the eleventh EduCon was held at Science Leadership Academy. Educators from around the country and globe visited the school to observe classes, attend discussion, and meet members of the SLA and larger educational community.

“Educon is one of our main fundraisers for the school,” explained Physics and Astronomy teacher and EduCon Co-Chair BJ Enzweiler.  “The reason we have a lot of the capabilities the school has is because of EduCon . . . We are able to pay for the laptops as well as at least half of our teachers’ salaries.”

Each year Educon is expected to make between $40,000 to $50,000, but it is one of several events that the school throws in order to raise funds for staff and programming.

“There’s also a secondary fundraiser called Fuel the Rocket . . . Both of those together make up the vast majority of fundraising for the school.”

Since EduCon has such a large impact on the finances of our school, it was important that it did well this year, just as in previous years. Despite the overall operation going quite well, this year’s Educon was not as successful as previous ones before it.

When asked about the performance of EduCon 2018, Mr. Enzweiler stated, “Things actually went really swimmingly day of. The thing that we did have different this year was that we had 100 less people in the building than we had in the previous year.” Fewer ticket sales meant less profit from the event.

“Sunday there weren’t that many adults there . . . I feel like people usually stay the whole time but people were starting to leave . . . Everyone was kind of over it.”

Now that EduCon is over and we know that it did not do as well as it normally does, the big question is, should there be concern for the SLA budget?

“No, there is no need for concern. We have what is called a “rainy day” fund.

“I don’t think I’m that concerned with the budget to be honest. I feel like Educon this year . . . it did have a large number of people.  I felt like, it was just a little bit smaller than last year.”

In addition, EduCon is projected to have made around $42,000, which is less than last year ($48,000) but still within the expected margin.

While there is no need for concern now, the fact that EduCon’s performance has been down does call for change.

“This is something that has been slowly happening over the last few years in that attendance has been getting lower and so we’re working on some methodologies to try and increase attendance so that we are raising as much as we had in the past,” Mr. Enzweiler stated. He elaborated further by saying, ““There’s probably just a few factors in there, one of them being just some of the forms of outreach are probably just going dry.”

Rivera has some ideas as to how things can be improved.

“Maybe the structure of it. Maybe the tendency of something new, like people want to go to something new. Maybe that ran off a little bit on people. . . I think for a panel, maybe some new sessions, some new ideas.”

Gucciardi-Kriegh thinks that bringing back merchandise could help to raise more money.

“They didn’t have t-shirts this year so that could have had something to do with it, usually the t-shirts make a lot of money”

One factor that needs to be taken into consideration for the future of EduCon would also be the campus move to Ben Franklin, which is less than two years away. Mr. Enzweiler thinks that this move will definitely affect the future dynamics of EduCon.

“I think the largest change is probably gonna come from whenever we do move to Benjamin Franklin . . . That’s gonna be the biggest change to how things run. In addition, since it’s going to be a public school, things might be different in how we relate the information about how we work the conference through the district because the building will actually be owned by the district at that time.”