SLA’s lunch line — both its len 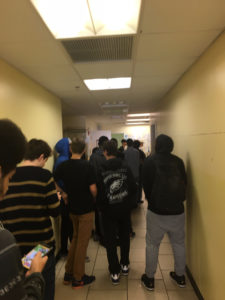 gth and the constant cutting — is something that almost every student jokes about. People attempt to make funny excuses to cut in the line, such as: “I’m not cutting, I’m going to the boy’s bathroom,” or “I have to ask my friend a question, so I have to go the front.”

Of course, not everybody finds the situation to be a laughing matter.

“I don’t really cut, it’s rare that I feel the need to cut in the line,” Junior Israt Jahan stated. If I do it’s because I think their gonna run out of food. When I see other people cut, I feel like strangling them!”

The school lunch is important to a lot of students because, for some students, it may be their only meal for the day. Lunch also provides students with the necessary energy for the rest of the school day, and when that is taken away from them, this results in students feeling as though they can never get lunch from school at all. Junior Taylor Green gave her insight on the situation.

“Not everyone has the same economic background, and the fact that lunch is free is what people depend on and it’s selfish that people think its okay for people to cut in the lunch line.”

Earlier this school year, an SLA senior sent a letter to school administrators explaining that this is a big issue that needs to be handled.

Hope isn’t lost. Principal Aaron Gerwer and Engineering teacher John Kamal are working on a solution for the chaos of the line.

“The things we proposed and thought about is to put a divider, so that people have to go single file. In the past we’ve had student monitors,” he explained.

“A long time ago I monitored the lunch line but to me, it felt contrary to what SLA is about, we expect students to work together and work things out.”

While typically students are able to fix school culture problems on their own, the lunch seems to get out of control with the number of people piling up in the line. It seemed like the issue has gotten to the level where faculty needs to take control.

But was there actually any staff members that are told to stop students from cutting the lunch line? Ms. Charnice, one two lunch ladies who work at SLA,  stated that she isn’t told to do anything about students cutting. She usually just tells them if they cut, they won’t be served.

But this doesn’t seem to be enough to stop the trend. Mr. Kamal has proposed a multitude of solutions.

No solution has been finalized yet,  Mr. Gerwer believes that the penalty for cutting in the lunch line should be that the student who committed the crime should be sent to the back of the line. If the student cuts multiple times, they would receive a detention.

In the meantime, the divider will be put in effect in a few weeks.