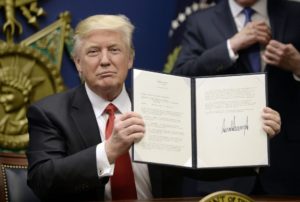 President Donald J. Trump’s first weeks in office have consisted of him bashing the media, signing executive orders, and turning America’s  allies into enemies. The globe sits in front of the television watching with the American people with inexplicable emotion.

I am not immune to all this. My phone lights up and before looking at the screen, I already know what I am going to see. Yet another notification of some ridiculous executive order.

President Donald Trump signed the executive order on Holocaust Remembrance Day portraying to the American people his true character and lack of care for history. Trump did not acknowledge the many Jewish victims that lost their lives that day and rather referred to them as “victims of Nazi Germany.”

The order, more commonly referred to as “the muslim ban,”  immediately took effect across dozens of airports in the U.S. Many refugees and immigrants stepped off planes so close to a new home and in some cases their families, to be detained. It did not matter if those entering or reentering the U.S. held green cards or visas. Lawful U.S. residents were being detained across the nation, sparking protests outside of many major airports, including Philadelphia International and J.F.K. Airport.

While this order is directly impacting people seeking refuge, people with educational visas, business visas, and green card holders, it is also negatively impacting current citizens. A federal judge, granted emergency stay for those entering the United States with legal documentation, halting the immediate impact of the executive order.

However, this is still a huge blow to the foundations and morals of this country. The United States is referred to as the “melting pot for a reason:” this country is made up of immigrants. Many of our citizens were once here on visas and green cards. My own parents, who hail from Italy and Iran have gone through this process.

Contrary to popular belief, entering the country does not happen automatically for people who travel here. To be granted a visa for the United States, you must go through a two year vetting process. The United States holds one of the most rigorous vetting processes, yet President Trump has repeatedly said  that terrorists can undercut the process. Currently the process of gaining citizenship includes an intricate and intense path. It is a process that can span over decades.

Many begin with applying for a visa. Many begin with an educational visa, then transfer to a working visa once they finish their studies. After a time they will apply for a green card, which allows them to stay indefinitely. Once they have been a lawful U.S. resident for a minimum of five years, they are able to apply for the naturalization test. Once they have passed this long process they are granted their U.S. citizenship.

I was born in the United States, and when I was two years, old I traveled to my father’s country, Iran. It was my first and last time traveling to the nation. While I do not remember my visit, I am left with tons of pictures of the beautiful sites and my entire family sitting together over dinner. These days, because traveling to Iran from the United States is virtually impossible due to the troubled political relations between our countries, my aunt and uncle travel here almost every summer.

Now they will be denied visas to visit us. A vast amount of the families living in the United States have other family members who live in one of those seven nations and are grappling with the same issue.

Iran took action against this ban and has decided to bar U.S. citizens from entering their nation. However, they are not barring people with legal documentation. Iran will be allowing people with valid Iranian visas access to their nation. This reflects a country that trusts their own vetting process. For the United States to throw their process out the window lets the unsubstantiated fear of Islam.. Iran’s actions follow a more favorable path rather than the unpopular actions taken by Trump’s executive order. 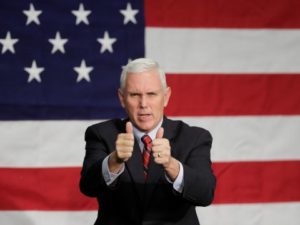 Love him or hate him, President-elect, Donald J. Trump has gotten a massive amount of attention in the news.

But what about the Vice President-elect, Mike Pence?

The news channels dance around Pence and his past. But I am curious as to who we have elected into office. On the Republican ticket, Mike Pence was the only one with a political background. While Trump is our President-elect it is important to note that he will be getting a massive amount of help from his VP, who has been in the political circuit for sixteen years. As a result, we know more about what his political agenda might be like as the second in command.

Mike Pence began his political career in 2000 when he was elected to congress to represent Indiana. During his six terms in the House of Representatives, Pence moved up within the ranks. By 2008 he was elected to the GOP’s number three spot, Republican Conference Chairman. This position allowed him to create the Republican party’s message.

Interestingly enough, Mike Pence was encouraged by the Republican party to run for President in 2012. However he decided to run for Governor of Indiana.

While governor, Mike Pence passed a Religious Freedom Restoration Act, an Act that shook the country. In 2015 Pence signed an Act that allowed the business owners of Indiana to discriminate against the LGBTQ community. Business owners could use their religious beliefs as an excuse not to serve gays and lesbians. President Obama even took the opportunity to come at Mike Pence and the Act during the White House Correspondents’ Dinner, “We’ve gotten so close that in some places in Indiana, they won’t serve us pizza anymore.” Obama said, jokingly suggesting that Vice President Joe Biden and himself were a gay couple.

Even though the bill was amended to explicitly say that it does not sanction discrimination, it is still an enormous part of Pence’s career and beliefs. Currently a bill for the ban of abortions on fetuses diagnosed with down syndrome is awaiting action by Mike Pence. This would take away a woman’s right to decide whether she is ready and willing to have a child. This bill outlines that the doctor may not perform an abortion if the woman’s reason is a diagnosis, race, sex, or nationality. All of the bills that Pence voted and will vote to pass or not must be looked at and analyzed by us, the citizens of the United States.

While there are many concerning attributes about Mike Pence and his career, it is important to recognize his upsides. While in Congress, Mike Pence was one of the few Republicans who voted against the No Child Left Behind act. If you are unfamiliar with the No Child Left Behind, it increases the amount of standardized tests. It’s goal was to help the U.S. thrive and solve the issue of failing schools. Instead this act attacks teachers, stresses the students, and does not get the intended results. No Child Left Behind, created during the Bush Presidency, caused an uproar in the education system. Many states have worked to reform it and cater it to their education system. In 2015, Obama passed a new version of the No Child Left Behind act that would reduce the role of the federal government. Using Indiana as a model, we can anticipate Pence’s general views. From this information we should be able to know which issues to hold a stronger stance on.

The Secretary of State pick Rex Tillerson has sparked much controversy. Rex Tillerson is the CEO of  Exxon, a company which has many dealings around the world and most prominently Russia. Tillerson was even awarded the Order of Friendship from Vladimir Putin. With all the scandals that Russia has been involved in pertaining to the U.S. this should not come as a shock, yet it’s repercussions are causing many to worry, predominantly other nations.

The picks that do not require approval include; Reince Priebus as Chief of Staff, Michael T. Flynn as National Secretary Advisor, Donald F. McGahn II as White House Counsel and Steve Bannon as Political Strategist.

Just a friendly reminder as I continue to read about all the possible ways President-elect Trump could be impeached, remember who is next in line (Mike Pence). Read up on politics and exercise your rights as a U.S. citizen.

For those of us who did not have the opportunity to vote in this election, do not worry and do not give up. In the next two years we will have the chance to voice our opinions and elect into Congress those who will represent our beliefs best. Keep on researching, our time to speak will be here before you know it.