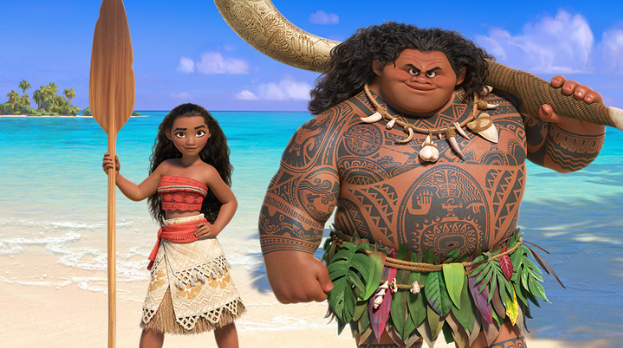 Beware: unavoidable spoilers in this review!

This year, however, Disney got my attention again with the release of their latest film. Recently Disney has been trying to mix things up a bit and portray different races and body types of young women. 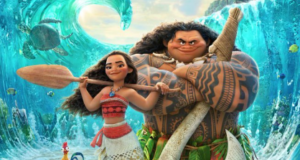 Their newest princess, Moana, is a polynesian teenager on a mission to save her people from the destruction of the world.  Moana is less of a princess and more of a chief to her people on her island of Motunui, which is an early settlement in the North island of New Zealand. She is heir to her father who grooms her into becoming a proper leader of their homeland.

The movie starts with showing a story of how the world was formed: in the beginning Earth was just oceans, until the island goddess Te Fiti came about and used her heart (a small green stone) to create life. Without it all life would die. Her heart was stolen by a shape-shifting demigod named Maui who wanted to give it to humans so that they would be able to create life on their own. Maui was then battled by Te Ka, goddess of lava, for the heart. He loses, leaving him and the heart lost in the ocean. The ocean chooses Moana a few years later to sail the oceans, find Maui, and have him return the heart. 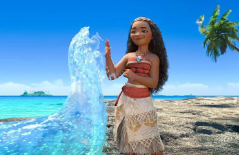 The only problem with this quest — and, being a Disney movie, there has to be some kind of challenge — is that Moana doesn’t know how to sail, and her father won’t let her or anyone else leave the reef because of the dangers of the ocean. Moana finally decides to leave after the sudden death of her grandmother who tells her she has to save their island or it will die because the heart of Te Fiti has not been returned. The rest of the movie revolves around Moana setting out on her quest to save the world. With Maui, her pet rooster Hei Hei, and the ocean as her allies she is unstoppable.

Overall I found the movie very enjoyable. The story that was told is based off a real Polynesian  legend about the oceans and islands which I find very interesting. I think that Disney did an amazing job portraying the culture and a young woman of color. Unlike earlier princesses of color like Tiana, Moana doesn’t look or act like every other Disney princess and I think that’s what makes her stand out a lot more. She is strong and doesn’t need a man or anyone else to rescue her, she is the rescuer of her own people. The only negative aspect of this movie is the confusing portrayal of Polynesian and Hawaiian culture. I was very unaware that she was polynesian until I looked at the plot of the movie and it said so; Disney gave the impression that she and her people where Hawaiian. I wish they would have done a better job of making it very clear that she was Polynesian and not Hawaiian because children should know the difference. Still the movie completely exceeded all of my expectations and I applaud all those involved.  It is a very good movie for children of different culture, body types, and goals to watch.