On Thursday May 9th, approximately 120 SLA students left the building to participate in a city wide protest against the proposed district budget cuts. 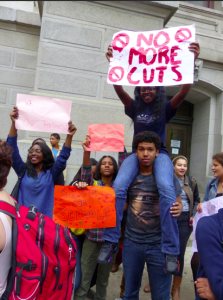 The idea started with a Facebook event and was  also spread by word of mouth following the student protest that took place the previous Tuesday.

The time leading up to 12:30 was hectic. SLA’s main office was buzzing before the unofficial start of the protest. Students ran in and out of classrooms calling their parents, and trying to get permission to leave and support the walkout.

Several students made signs to bring to the protest.

Starting at 12:30, SLA students who had received permission from their families checked out of the building and began their march down Market Street.

They marched in a pack, signs in the air, chanting “Save our schools!” and “Students united, we’ll never be defeated!”

When they arrived at City Hall, the joined with students from Central, Palumbo, Franklin Learning Center, CAPA,  and many more schools from around Philadelphia.

Many were interviewed by the news, and above city hall two helicopters filmed the event.

At around 1:30 PM , the students began their march down Broad Street, led by police who, along with members of the Philadelphia Student Unions, served as escorts to 440 N. Broad St.

The torrent of marching students took up an entire lane of traffic. The cars in the opposing lane were honking in support. With every honk the students cried out and cheered.

Students continued to protest into the evening hours, waning in numbers as the hours went by.